Save the date, if you are in Toronto, and interesting in hearing Shawn talk about Alain de Bott0n, among other topics. 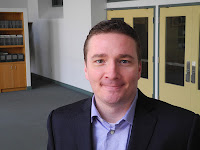 The Reverend Shawn Newton became the 23rd minister of First Unitarian in September 2007, arriving in Toronto with his spouse, Bob, after living for many years in Boston.  He began his undergraduate studies in the Conservatory of Music at Oberlin College, eventually completed a bachelor degree in religious studies at Harvard’s Extension School, and later received a Master of Divinity from Harvard Divinity School.
In the course of his preparation for ministry, Shawn served five different congregations, including the Cathedral of Hope in Dallas, Texas; Arlington Street Church in Boston, where he was administrator; the Universalist Unitarian Church of Haverhill, Massachusetts, as a student minister; the First Unitarian Church of Cleveland, Ohio, as the Killam Fellow; and the Unitarian Universalist Society of Wellesley, as Assistant Minister. Shawn’s clinical pastoral education was undertaken at the Dana-Farber Cancer Institute in Boston.
Shawn loves to travel, to take in theatre and classical music, and to explore the fascinating array of neighbourhoods in Toronto.